Under the purpose statement “to serve the largest possible number of people in the most helpful way” Moody Radio (WMBI) came on the air as the radio voice of the Moody Bible Institute in July 1926. Events earlier in the year had cast doubt on whether any such radio station would come to fruition. Even though everything was in place in January of that year to begin operations, Moody officials found out to their dismay that there were no available frequencies on which to broadcast.

This required Moody to sign an agreement with radio station WENR for up to nine hours of broadcast time each week. In the meantime, another Chicago radio station became dissatisfied with their channel assignment and decided to pirate a Canadian frequency. In the ensuing fallout from that action, their original frequency was given to the Moody Bible Institute and on the next day, July 28, 1926 at 7 p.m., Moody Radio went on the air with a two-hour dedication program.

This was the humble start of what has become a continuous source of vital inspirational programming to over four generations of Christ-followers in the greater Chicagoland region. Over the years, the ministry of Moody Radio has extended around the world through the hundreds of local outlets providing Moody Radio programming to their listeners.

God raised up scores of talented people on Moody's Chicago campus in the early years. In a day when there were no commercial music labels, the Moody Radio staff, made up of both professional and student musicians, performed live music for broadcast. The faculty at the Institute provided many hours of teaching and preaching at a time when preaching on the radio was considered a novelty.

The 1940s brought original drama to Moody Radio with Miracles and Melodies, Number 9 Elm Street and Stories of Great Christians. Moody Radio saw significant growth in the 1950s, 1960s and 1970s as it sought to meet the challenge of encouraging, enlightening and edifying the Chicagoland listenership. The 1980s saw the advent of the Moody Broadcasting Network, providing satellite distribution of live programming from the Moody studios in Chicago to radio stations across North America, and allowing for the startup of hundreds of radio stations needing program material distributed directly to their studios and transmitters.

Today, Moody Radio is still working to serve the largest possible number of people with the life-changing message of the gospel of the Lord Jesus Christ and is looking forward to ministry throughout its ninth decade of Christian radio service. This is not limited to the two Chicago transmitters, but is being accomplished through the addition of three HD digital signals and six program services available via streaming format over the internet.

With this international outreach firmly in place, the people that labored to put a two hour program on the air back on that first day in July 1926 would be amazed at how the Lord has blessed that very humble beginning so many years ago! 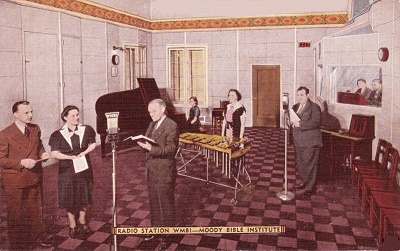