Karl loves adventure. He completed the 1,100-mile Iditarod Trail Sled Dog Race at age 18 and coached a multi-racial track team in South Africa. But for over three decades Karl has been on the most incredible adventure of life—following Jesus Christ and enjoying His promises. Karl says his mission is “to inspire a spiritual revolution in the church that reaches the world.” Karl launched two college/career ministries that thrived spiritually. He spoke nationally with his wife, Junanne, at FamilyLife marriage conferences for 11 years and led a dynamic church that grew to be the largest in Alaska. This church was featured on the front page of the New York Times (November 23, 2007) for its strategic outreach and innovation. Karl is host of Moody Radio’s Karl and Crew Mornings on WMBI 90.1 FM Chicago. He is also lead pastor of 180 Chicago. He and Junanne have two adult children. Ally is the co-host of Karl and Crew Mornings and is passionate about communicating the gospel of Jesus Christ through powerful storytelling. She earned a master’s degree in Journalism from DePaul University and started in broadcasting as a television news reporter. Ally is also host of Moody Radio’s Snapshot Testimony. The podcast features Ally interviewing guests about one pivotal moment that has shaped their faith in Christ. Ally is a former college volleyball player, has lived in five different countries and is always up for a cup of tea and a good game of Scrabble. Ally and her husband, Henry, have two children and reside in Chicago. Diana is a seasoned and awarded Chicago radio veteran, with several years behind the mic. She is currently the Senior Producer for Karl and Crew Mornings, plus traffic and sports reporter. Diana is a graduate of the University of Evansville, and was blessed to study in England.  She is also the host of the feature, Let's Di'alogue, and a host on Moody Radio's Praise and Worship Channel.  Diana is an advocate for orphan care and foster parenting, and her passions include missions in South America, the Chicago Cubs, and her Greek heritage. During her free time, Diana enjoys theater, dance, writing her blog ('Mom' ents), and time with her family. Jonathan has an educational background in communications, but that wasn’t always where he thought his life would go. Although his plans were to originally work in law enforcement, God shook him up and showed him something beautiful in the world of radio. Jonathan loves to teach the Word of God to help others grow in their walk with Christ. He is the husband to his loving wife, Shannon, and is a die-hard fan of the Chicago Cubs and Chicago Bears. 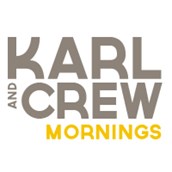