Join us for a full hour of news and opinion from our dynamic husband and wife duet. Hear their thoughts on some of the stories making headlines - and then weigh in with your thoughts. Be sure and join us for a great hour of lively conversation.

Hour 2: Headlines of the Day

This hour we take a look at some of the stories you might have missed but are impacting the world around us. Get your dialing fingers ready to join us with your thoughts on how to look at the news through the lens of Scripture. 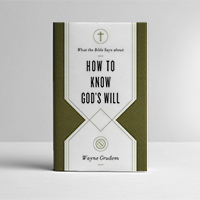 When making tough decisions, we're often paralyzed by fear, indecision, or confusion. At these critical crossroads, we wait impatiently for someone to tell us whether to turn right, left, or move straight ahead! In his latest book, Wayne Grudem equips us with biblical tools for finding and following the will of God. The answer to your dilemma may be clearer than you think...once you hold the facts under the light of God's Word.

As a Parshall Partner, you help Janet bring biblical truth into the marketplace of ideas and will also receive exclusive resources from Janet!

Question of the Week:

2020 has been a year for the history books. But even in the midst of all that is challenging us, both personally and as a nation, we can be grateful. What are you most thankful for right now? How has God blessed you, provided for you and sustained you this year? Thanks for sharing your thoughts.