Sponsor a Child Change a Life

Nearly 20 percent of the world's children live in extreme poverty... on less than two  dollars a day.  The problem seems so big, many people throw their hands up and say they don't know how to help.  Compassion International President Emeritus Wess Stafford has a solution.  He joins Ed Stetzer to tell you how you can sponsor a child and change lives for the Kingdom. 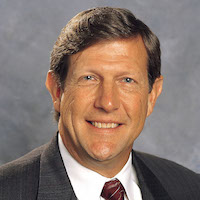 Dr. Wess Stafford is President Emeritus of Compassion International, an internationally recognized advocate for children in poverty.  As the son of missionaries to the Ivory Coast, Wess grew up as one of the village children cared for by a wise and loving African "extended family." But his young heart was often broken as he watched his African friends die from the cruel ravages of poverty.  Wess joined the staff of Compassion International in 1977 and worked with the ministry, both overseas and at headquarters. He served as President for 20 years.  Wess is a veteran, having served four years in the U.S. Army as a linguist in military intelligence.  He earned undergraduate degrees from Moody Bible Institute, Biola University and a master's degree from Wheaton College, as well as a Ph.D. from Michigan State University.  Wess and his wife Donna have two daughters, Jenny and Katie.