I Found the Truth

​Facts tell.  Stories sell.  The team at I-found-the-truth-dot-com is undoubtedly leveraging the power of Story, as you’ll discover this week on The Land and the Book.  You’ll hear the actual testimony of a Jordanian woman who left Islam to follow Jesus.  Plus, learn how video testimonies are impacting the Muslim world for Christ. All on The Land and the Book. 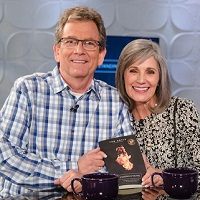 Tom Doyle fell in love with the Middle East on his first Biblical tour of the Holy Land. In 1995, he became an official tour guide for the state of Israel and developed a passion for ministering to the Israeli people, Arabs and Jews alike. Tom felt called into full-time ministry there in 2001 and joined e3 Partners as the Middle Eastern branch director.  JoAnn was a pastor’s wife for 20 years before God called her and her husband into full-time work in the Middle East, Central Asia and North Africa in 2001. JoAnn launched a ministry for Women in the Middle East named Not Forgotten. The team has ministered in Israel, Egypt, Gaza, The West Bank, Jordan, Lebanon, Afghanistan, India, Korea, and right here in the United States