Famous Couples in the Bible 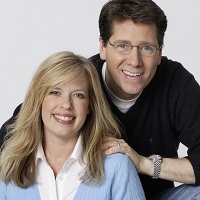 No. 1 New York Times bestselling author and psychologist Dr. Les Parrott has been featured on Oprah, CBS This Morning, Today, CNN, Fox News, and The View, and in USA Today and the New York Times. Dr. Parrott's books, often coauthored with his wife, Dr. Leslie Parrott, have sold more than three million copies and have been translated into more than thirty languages. He is the creator of three revolutionary relationship assessments: SYMBIS.com, DeepLoveAssessment.com, and Yada.com.

Dr. Leslie Parrott is a marriage and family therapist and co-director with her husband, Dr. Les Parrott, of the Center for Relationship Development at Seattle Pacific University. She is the author of First Drop of Rain and God Made You Nose to Toes, and co-author with her husband of several bestselling books, including the Gold Medallion Award-winner Saving Your Marriage Before It Starts. Leslie is a columnist for Today's Christian Woman and has been featured on Oprah, CBS This Morning, CNN, and The View, and in USA Today and the New York Times.