Sharing the gospel with those who don't know Jesus as their Lord and Savior...yet. Many of us have a hard time doing this. Not because we don’t want to. We just don't know how to get the ball rolling. We're intimidated. What if… They think I’m weird? A religious fanatic? I might offend them. On and on it goes. Many times we simply talk ourselves out of it. And Satan gives us a thumbs up from the sidelines. Then we feel guilty. And discouraged. The good folks at Evangelism Explosion International are ready to help! John Sorenson leads the ministry and he joins us with an overview of an upcoming training event in Tampa on Saturday, November 6th called Equip America. 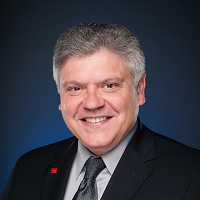 Before being called into ministry full-time with Evangelism Explosion, Dr. Sorensen worked on regional and national TV and radio ads, as well as for sound design for films. Within the ministry, John has served as the Director of Marketing, Vice President of Ministry Advancement, and Executive Vice President before being appointed President in 2008. John received a Master of Arts in Evangelism and Doctor of Divinity from Knox Theological Seminary, and a Doctor of Humane Letters from Montreat College.