Gun Lap: Staying in the Race with Purpose – Robert Wolgemuth

You may think you're too old to run fast, but you're not too old to run well. When the lead runner starts his final lap in a long-distance race, the starter fires his pistol for the second time. This signals the start of the gun lap—the last chance to leave it all out on the track. Robert Wolgemuth joins us for an honest and encouraging conversation for guys who are running their last lap, or younger men who are looking ahead to their gun lap and want to live the rest of their lives with purpose and strength. 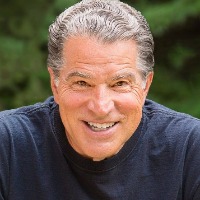 Robert Wolgemuth graduated from Taylor University in 1969, from where he also received an honorary doctorate in May 2005. He is the author of more than twenty books, including “The Most Important Place on Earth,” “She Calls Me Daddy,” “The Most Important Year in a Man’s Life,” “Lies Men Believe,” “Like the Shepherd,” and “You Can Trust God to Write Your Story,” co-written with his wife, Nancy DeMoss Wolgemuth.  Robert is the father of two grown daughters, two sons-in-law, granddaddy to five, and granddaddy-in-law to one. Robert and Nancy live in Michigan.