Pastor Dave Hataj teaches us how to cultivate true inner goodness, meaning, and mission at work—no matter what you do. Your workplace can and should be a place of significance! His new book: Good Work: How Blue Collar Business Can Change Lives, Communities, and the World.

Plus, during the 8 am hour, Open Line's Dr. Michael Rydelnik joins us for more Bible Q&A on Mondays with Michael! 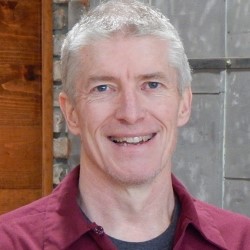 Dave Hataj is the second-generation president and owner of Edgerton Gear, Inc., a Wisconsin-based custom gear manufacturer. As a journeyman machinist by age twenty-one, he then earned a Bachelor's Degree from the University of California-Irvine. He completed his Master's Degree from Regent College in Vancouver, BC. His graduate work focused on Systems Theory in a Family Business context. In 2014 he earned a Doctorate of Transformational Leadership from Bakke Graduate University, developing a curriculum called Craftsman with Character. The course introduces high school students to the trades and manufacturing as an excellent career path, while developing character and soft skills.