If your paycheck has not kept up with inflation, there may be some good news for you regarding your taxes in 2023. Dr. Jeff Haymond from Cedarville University will outline some of the tax-bracket shifts due to inflation that may mean you fall into a lower tax bracket this year. If you're beginning the process of gathering what's needed for this year's filing, this conversation will give you a heads-up concerning some of the changes that have been made and what that may mean for your pocketbook!

Hour 2: By Grace Alone: A Conversation with Craig Ireland

The Charles Spurgeon book All of Grace has been instrumental in the conversion of innumerable souls and is now available with updated language for a new generation. Theologian and pastor Craig Ireland has revised the original Spurgeon book with his new release, By Grace Alone. Ken and Deb visit with Craig Ireland on Thursday's show, exploring the incredible impact of this dearly loved Spurgeon classic. We'll talk about the timeless wisdom and encouragement from this little book originally published in 1885 that the world desperately needs to hear in 2023. Dr. Jeff Haymond is a Professor of Economics at Cedarville University He joined the faculty in 2010 after a 29-year career in the United States Air Force. While in the Air Force. Colonel Haymond had assignments in engineering, satellite control, and launch operations. He also taught at the United States Air Force Academy and was an Air Force Fellow at the Brookings Institution. His research has been published in the Quarterly Journal of Austrian Economics, Public Choice, the Journal of Public Choice and Public Finance, and Strategic Studies Quarterly. His current research interests include economics and religion, as well as monetary theory. 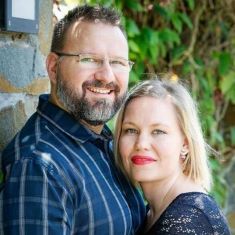 Craig Ireland was born in Sydney, Australia, and now resides in Rochester, New York. Craig earned both a Bachelor's and a Master's degree in Theology and is currently working on his Ph.D. He has served in various ministry roles over the past 20 years. From Church planting, church revitalization, and serving as Senior Pastor for several congregations. Craig has also conducted and taught extensively in pastoral training seminars and conferences worldwide, resourcing tens of thousands of church planters among unreached people groups.