Every other week on Ken and Deb in the Morning Todd Nettleton from Voice of the Martyrs drops in with the latest news stories and testimonies from the persecuted church. Be listening to hear specific prayer requests and concerns from our brothers and sisters that live in areas of the world where Christians suffer and pay a great price for following Jesus Christ. Also, be encouraged as we hear how the gospel is being preached and how the Church is growing in some of the darkest places in the world.

Hour 2: The Chosen Season 3: A Conversation with Amber Williams

The Chosen has brought the story of Jesus alive to millions and a new season is coming soon to the big screen! Wednesday we visit with Amber Williams who portrays Tamar and will share some of her personal stories as part of the cast and also highlight those moments that have impacted her life and faith. Get a behind-the-screen look at this popular series that has brought the Bible to life on Wednesday's Ken and Deb in the Morning! 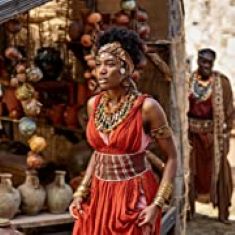 Amber Shana Williams is a bilingual American actress, born and raised in the United States. Her father was a gospel music producer, and her mother, a career military nurse and officer. She showed an interest in acting from an early age. After graduating from university and later moving to Spain, Williams began training in London. She is known for her role in the breakout series “The Chosen.”