Hour 1: Sukey and Cece's Story: A Conversation with Deb Bowen and Devine Chepape

What is the impact of a person's story? How does God use adversity from one generation to invoke courage in another? A Book by Me's Deb Bowen will introduce us to foreign exchange student Devine Chepape. Devine will share how learning about the tragic stories of slavery from two different women has taught her how God uses tears from one generation to inspire courage and hope in another.

When was the last time you felt comfortable bringing your whole family to a summer blockbuster? Family Camp is the summer family fun movie that will have your whole family in stitches without worrying that an "inappropriate scene" is coming up. The Skit Guys Tommy Woodard and Eddie James talk with Ken and Deb about this summer comedy that will have you thinking back to your camp days and maybe even planning a family camp trip! Tommy Woodard’s illustrious career began around 1975 on the front porch of his home where his older (and bossier) sister Debbie would direct him in homemade plays. They would invite their parents, neighbors, and strangers walking by to sit on the lawn and enjoy their masterful works of art. He went on to perform in high school plays, where his favorite thing was pretending to be different characters with his best buddy Eddie. (Who knew 30 years later they would be doing that and reaching millions through stage and screen?) In addition to being one half of The Skit Guys, Tommy has co-authored over a dozen publications with Eddie James, including their latest book about friendship, “Smells Like Bacon.” He also serves as a pastor at Newchurch in Oklahoma City. Tommy lives in Edmond, Oklahoma with his wife and kids. 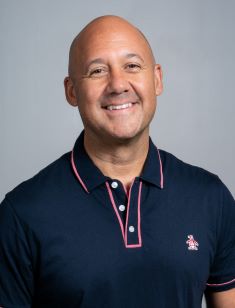 For over thirty years, Eddie James has performed comedy skits and improv on thousands of stages all over the world, acted in hundreds of short films and skits viewed by countless millions, and yet he is still brought to tears almost every day when he gets letters and emails from fans far and wide describing the personal impact The Skit Guys’ skits and short films have had on others' lives. In addition to being one half of The Skit Guys, Eddie has co-authored over a dozen publications with Tommy Woodard, including their latest book about friendship, “Smells Like Bacon.” Eddie lives with his wife and two daughters in Sachse, Texas, and is a creative consultant and online pastor at his church.