Do you struggle with prayer? Has your prayer life become more like a ritual than relationship? Wednesday we welcome Bible study teacher and writer Crickett Keeth to walk us through her own journey in prayer and her new study, On Bended Knee.  Crickett has studied the prayers of prophets, warriors, and kings in scripture and she’ll offer insight as what we can learn from those scriptural prayer that will deepen our prayer life.

“I don’t care if they remember me, Only Jesus”, that’s the defining sentence for the new Casting Crown’s project and Wednesday we’ll talk about the song and the tour on Ken and Deb in the Morning. The band’s founder and lead vocalist Mark Hall will be with us to talk about the group and their upcoming August concert in Dubuque at the Five Flags Center.

Crickett Keeth is the Women's Ministry Director at First Evangelical Church in Memphis, Tennessee, where she writes and teaches the women's Bible studies. Crickett was on staff with Cru for ten years and is a graduate of Dallas Theological Seminiary. Her life purpose is to encourage others to passionately pursue Jesus Christ. 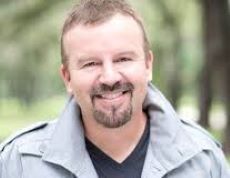