Is one of your favorite Christmas traditions sitting down with a hot chocolate, a big bowl of popcorn and watching your favorite Christmas movie? Ken and Deb want to hear your pick and we’ll talk about the new heartwarming PureFlix film, Christmas Manger. Andrea Logan White will share how her personal struggles uniquely qualified her for this role, and how the message of the manger is one of hope and healing.

2019 is less than 2 weeks away, and Thursday we’ll hear about a healthy new way to celebrate the New Year and help a local ministry. Youth Hope’s Resolution Run  is coming up and Mark Drake and Hannah Carr will give us the details on the New Year’s Day run and how you can boost your health and help kids and teens in the Quad Cities!

As you gather with family this Christmas, many are spending their Christmas in local shelters. What are some ways that we can reach out to the less fortunate through Christian Care? Steve Gottcent from this ministry located in downtown Rock Island will be in studio Thursday to share some ways for us to be a blessing this holiday. 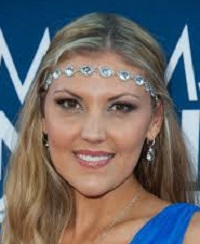 As a wife, mother, actress, producer, and speaker, Andrea Logan White has walked through the discouraging valleys that “striving for perfection” brings. She has survived a life-threatening battle with an eating disorder and emerged with an enduring passion to encourage women who experience similar anxieties with body image struggles and weight issues in particular. Her hope is that women will be empowered to break free of the expectations of today’s world, and to live healthy, fulfilled lives so they can pass the same hope along to others.

A Chicago-area native, Andrea moved to San Diego after high school and discovered a love for acting while studying theater at a local college. She then began a modeling career that led her to Hollywood and the world of television, including appearances on “The X Show,” “Fear Factor” and most recently, “Hitting the Breaks.” She also pursued a business in health and fitness, becoming a celebrity fitness trainer for clients like Eva Longoria and Ewan McGregor.

Soon after meeting and marrying her husband, actor and producer David A.R. White, she dove into her film career, starring in films such as “SIX: The Mark Unleashed,” “The Moment After 2,” “My Date with Drew,” “In the Blink of an Eye,” “Sarah’s Choice,” “Marriage Retreat,” “Brother White,” “Revelation Road” I & II, “Mom’s Night Out” and “Do You Believe?.”

Andrea lives in Los Angeles with her husband, David, and their three children, Ethan, Ocean and Everson. Andrea is co-owner of Pure Flix Entertainment and continues to produce, act, write and speak regularly; spreading her message of grace and embracing flaws and imperfections to women around the world.