Hour 1: Stories of God at Work in Aftermath of Hurricane Ian - with Megan Rose

To meet the growing needs of Southwest Florida families and children in the wak of Hurricane Ian, there is an organization that is working to build relationships with those in the communities impacted by this hurricane. On Friday's Mornings with Eric and Brigitte, CEO of Better Together, Megan Rose joins us to talk about how this organization has deployed an army of volunteers and community partners over the past three weeks to provide help to those who could not obtain it on their own.

On Friday's Mornings with Eric and Brigitte, Christian artist, Austin French joins us to talk about his book, his music, and the upcoming 25th Anniversary Benefit Concert where he will be performing which will be held on Friday, November 11 at 6 p.m. at Calvary Chapel Fort Lauderdale. 4KIDS will be celebrating 25 years of service and the 30,000+ lives that have been changed through the 4KIDS vision of A Home For Every Child. There will be musical performances that evening by Austin French and Mike Donehey. 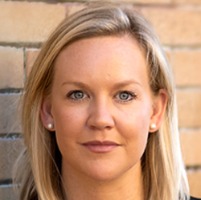 Megan Rose is the CEO of Better Together. In addition to her passion for helping families, Megan has a wealth of education, over ten years of dedicated experience in social services. She holds an undergraduate degree from Liberty University in Psychology and a Master’s in Human Services with a dual concentration in Executive Leadership and Family and Group Dynamics. Family is everything to Megan, and she counts her husband Mason and their three precious children, Brady, Ellie, and Emma, as her greatest blessings in life. Megan and her family approach this ministry together, and routinely host children in their home.

Austin French grew up with two sisters in a Christian family. His father was the worship pastor of their church and his mother was a music teacher. When he was in high school, he went on his first tour with his faith-based bands. He became a full-time pastor after leading a church in Georgia at 18 years. Austin French is married to Joscelyn French. He met his wife in the church when he was just 18 years old. The couple tied the knot in 2014 and have three children - two sons and one daughter. After moving to Nashville, the couple adopted one of their sons, Coleman. Jesus Can, a vibey story song about his growing up years, is Austin at his most vulnerable and most redeemed. Writing the song brought up so much pain (and ultimately healing) from his past, he decided to expand the idea into a book.