Wednesday on Mornings with Eric and Brigitte Moody Radio financial expert, Glenn Zimmerman joins us to talk about the big news last week of the Federal Reserve starting to raise interest rates to fight inflation. A discussion may follow on rising interest rates and how it creates a new world of issues, with good and bad aspects to it.

On Wednesday's Mornings with Eric and Brigitte, Dr. Patrick Bisher, President of the GRIT Academy will talk about the GRIT program, which is an acronym covering the subjects of growth, resilience, integrity, and time. Dr. Bisher will be the featured speaker at the Gathering Of Men's Outreach Breakfast on Friday, April 22, 2022 from 7-9 a.m. at the Airport Hilton West Palm Beach.

To Register or For More Info 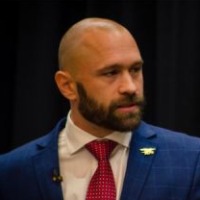 At the age of nine, Patrick Bisher was told he would never walk again because of a degenerative hip disease that confined him to leg braces and crutches for over a year. After surviving multiple surgeries, a body cast and by never being 100% of who he used to be, he found a way to improve just 1% better every day, and developed the 1% Mentality. Patrick became a 3 sport athlete, captain of his teams, and eventually became an operator of the world's most elite fighting force, in the Navy SEALs. Continuing to mature Patrick has obtained his Doctorate in Servant Leadership. Dr. Bisher now runs his full-scale mentoring program to the world's top leaders in their field.