On Friday's Mornings with Eric and Brigitte, 2021 Dove Award Winner Evan Craft joins us to talk about how his passion, authenticity, and anointing are the barrier-breaking qualities that have allowed a non-Hispanic man to become one of the most successful artists in Latin music today. He will be a part of an upcoming Night of Worship set to come to the James L. Knight Center in Miami on Saturday, March 12, which is also featuring Latin GRAMMY Nominee Christine D'Clario and Jared Emerson.

This is a story about friendships and commitment to one another so incredible you wouldn’t believe it if it wasn’t true. Kevan Chandler didn’t let being in a wheelchair stop him from having a big adventure. During the summer of 2016, Chandler and six of his buddies went on a trip to Europe and left his wheelchair at home. Chandler, who has spinal muscular atrophy, and his friends trekked along France, England and Ireland, with his pals securing him in place via a specially-adjusted carrier. On Friday's Mornings with Eric and Brigitte, Kevan Chandler joins us to give us a glimpse of the constant love of God so rich and beautiful in the company of good friends and the profound power of friendship and self-sacrifice. 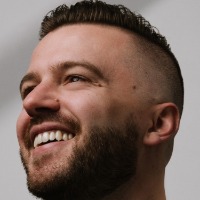 Evan Craft is a Christian singer and songwriter, best known for original praise and worship songs in both English and Spanish. Evan began playing guitar at the age of 12 and was writing his own songs and performing by the time he was in high school. He self-released several albums and EPs and distributed them at shows. Evan also undertook a serious study of Spanish during his adolescence, developing a proficiency that allowed him to ably assist his father in running a homeless shelter in Los Angeles. Evan's music can be described as a mix of congregational hymns and unforgettable melodies. His goal is to lift God's name to the heights of the people and let Him take care of the rest. Evan has been married to his wife, Rachel since September 17, 2021. Kevan Chandler grew up in the foothills of North Carolina with his parents and two siblings. The youngest of the bunch, he was the second to be diagnosed with spinal muscular atrophy (SMA), a rare neuromuscular disease. He has a Bachelor of Arts degree in Counseling from John Wesley College. An avid storyteller, Kevan has authored several books, including a memoir of his adventures with his friends, and speaks worldwide about his unique life with a disability. He is also the founder of the nonprofit organization, We Carry Kevan.