Hour 1: Freshening Up Your Bible Study

Even though we don't experience the typical seasons in South Florida, Fall is when we think about the change of color in the leaves as winter approaches. Authors sometimes use colors as a way to make the text more vivid and enhance the way the story is told. Wednesday on Mornings with Eric and Brigitte, MBI professor, Dr. James Coakley tells us that in subtle but significant ways Biblical authors use colors in the background of the telling of the account that add a dimension to how readers should be viewing the text or characters within the text.

Hour 2: Things I Wish I'd Known Before My Child Became a Teenager

Parenting is about raising kids to become adults, however, the transition from childhood to adulthood is hard for everyone. Physical changes—on the inside as well as the outside—make for a lot of ups and downs. The teenage years are turbulent, no question about it. But if you're a parent or caregiver, don't despair. There's a way through! Join author and speaker, Dr. Gary Chapman on Wednesday's Mornings with Eric and Brigitte as he combines the hard-earned wisdom of a parent with the expertise of a counselor to help parents know what to look out for. Most of all, he stresses that a parent's example is more important than their words. 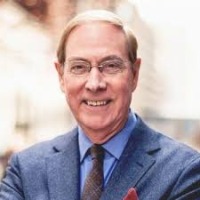