Hour 1: God's Not Dead: We the People

Grammy award-winning singer/songwriter Francesca Battistelli joins Mornings with Eric and Brigitte on Friday to talk about the new movie in the God’s Not Dead series, God’s Not Dead: We the People. In this feature, Rev. Dave finds himself at the defense of a group of Christian homeschooling families after they receive an impromptu inspection by a progressive, local-government official—who doesn’t like what she finds. Francesca Battistelli makes her debut as an actress in this soon-to-be-released movie.

Our educational system in the U.S. has been very unsettled since the beginning of the pandemic, with the teachers and students having to make huge adjustments in their formats and learning styles just to have a somewhat “normal” classroom experience. Some parents who have school-age children are considering homeschooling as an option for the first time and have many questions. Friday on Mornings with Eric and Brigitte, Sue Puchferran of HEED Homeschooling will offer some much-needed help and encouragement to parents who are considering homeschooling. 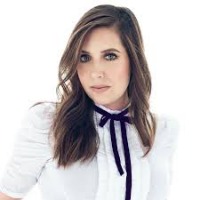 Francesca Battistelli is a Christian musician from New York City, New York. She was originally an independent artist and had released an independent album, Just a Breath, in 2004. Her first studio album on Fervent Records, My Paper Heart, was released on July 22, 2008. Battistelli received her first Grammy Award 2009 nomination for "Best Gospel Performance" for the single. rancesca prefers to point people to something beyond herself –towards hope in Christ. Her soulful piano-pop sound resembles a blend of her music interests – jazz, rock, gospel and R&B – woven beautifully together with themes of trust and risk-taking. Francesca is married to her husband, Matthew Goodwin, and they have five children. Sixteen years ago, with two friends, Sue Puchferran began HEED, a home school hybrid program, to assist parents in their journey to home school their high schoolers. HEED has grown to help thousands of students through the years. Sue is a Florida native, but a biomedical engineering graduate from Purdue University. She is married to her high school sweetheart for almost 40 years and they have four grown children and three grandchildren. All of Puchferran's children were home schooled and are now working as a lawyer, doctor, nurse and CPA. They are all serving God, which is Puchferran's greatest joy!