Hour 2: From Prison House to Freedom in Christ

Thursday on Mornings with Eric and Brigitte, Scott Sullivan, a South Florida businessman, joins us to share his personal testimony of his involvement in the scandal at WorldCom and the lessons he learned on his journey. 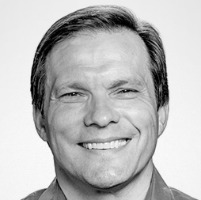 President and Chief Executive Officer Santiago “Jimmy” Mellado has a deep love and passion for the beauty and potential of local churches fulfilling their Jesus-given mandate to redeem and restore this world for His name’s sake. Jimmy Mellado's educational background includes graduating cum laude with a Mechanical Engineering degree from Southern Methodist University (SMU) in Dallas,Texas and a Master of Business Administration from the Harvard Business School. He is also an accomplished athlete. In college, Jimmy was a member of the 1983 NCAA Division I Indoor & Outdoor National Championship team at SMU where he competed in the decathlon and held the school record. After college, Jimmy went on to place 4th at the 1987 Pan American Games and 26th in the 1988 Seoul Olympic Games, competing for the country of his birth, El Salvador. He has continued to stay engaged with the sport he loves by serving as a volunteer track and field coach. Jimmy is married to Leanne and they have two daughters and a son.

Fill the Stadium to Help Children in Crisis Scott Sullivan has worked 30+ years in finance and business development including 8 years as a public company Fortune 500 Chief Financial Officer. In 1989, Scott moved to South Florida and joined Telus Communications as CFO. The company was soon bought by ATC Long Distance which was then later bought by WorldCom. In 1994, Scott was promoted to Chief Financial Officer of WorldCom and two years later to the board of directors. In 1998, he was awarded the Chief Financial Officer of the year in the mergers and acquisitions category for the purchase of MCI. In June 2002, Scott was fired by the board of directors of WorldCom and two months later arrested by the FBI for accounting fraud. He pled guilty to federal charges, cooperated with the United States government, and was sentenced to 5 years in prison. Scott received his education at the State University of New York in Oswego graduating summa cum laude with a bachelor degree in Business Administration and Accounting. Scott and his wife Susie live in South Florida and they have three adult children. Scott received Jesus Christ as his Lord and Savior on April 16, 2006.