All of us sin, and if we are in Christ, we are made righteous in Him--not by our works, but only by His amazing grace.  However, every day we struggle with the battle between the flesh and the Spirit, and we know the scripture, "The heart is deceitful above all things, and desperately sick; who can understand it?" So, when we fail miserably and sin, how do we approach God?  Thursday on Mornings with Eric and Brigitte, Pastor Bernard King from Cornerstone Bible Fellowship in Delray Beach talks about how to reclaim and maintain personal victory in Jesus Christ. 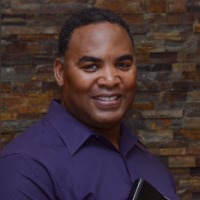 Pastor Bernard King is originally from Griffin, Georgia.  He was raised in a traditional Southern African American (Baptist) Church.  He was married to Gloria in 1988 and has three sons, Bernard, Jr., Philip and Seth. He was ordained as a pastor in 2005, and Bernard and Gloria started a bible study in Delray Beach in 2008 that eventually became Cornerstone Bible Fellowship.