On June 6, 1944, some 156,000 American, British, and Canadian forces landed on fives beaches along a 50-mile stretch of coast of France’s Normandy region. The Battle of Normandy, also known as D-Day, lasted from June 1944 to August 1944 and resulted in the Allied liberation of Western Europe from Nazi Germany’s control.  Join Mornings with Eric on Thursday when Jerry Newcombe, author and on-air personality/senior producer for D. James Kennedy Ministries will talk about this very important time in America's history.

Hour 2: Reflections of Veterans on D-Day

On Thursday Mornings With Eric spoke with Chairman and Founder of Honor Flight South Florida, Rick Asper about the many experiences he has shared with America's veterans when they spoke of their thoughts on the anniversary of D-Day, a very special day in America's history. 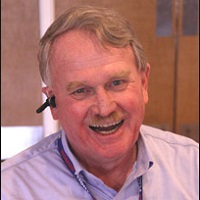 Since Rick Asper graduated from law school with a juris doctor degree in 1976, his professional experience has been exclusively related to aviation, with an emphasis in aviation regulatory expertise. He has traveled to over fifty countries during the last forty years, representing airlines, government civil aviation bodies, airports, airport sponsors and private aviation interests worldwide.