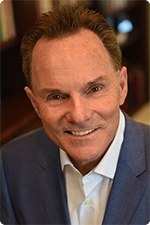 Since 1986, Pastor Floyd has served as the Senior Pastor of Cross Church, Northwest Arkansas, a multi-campus church. In Dr. Floyd’s 30+ years of ministry in Northwest Arkansas, the church has baptized over 18,000 people. In 2001, First Baptist Church of Springdale became a multi-campus ministry with the beginning of The Church at Pinnacle Hills. In 2010, the church changed its name to Cross Church and now has three campuses in Northwest Arkansas: Springdale, Rogers, Fayetteville; and a campus in Neosho, Missouri. The church is committed to planting churches regionally, nationally, and internationally. Dr. Floyd also serves as the host/leader/speaker of The Summit businesspersons luncheon, equipping an estimated 400-700 businesspersons weekly.