The Life and Legacy of John McCain

John McCain was an American statesman, politician and war hero who served as a United States Senator from Arizona from 1987 until his death on August 25, 2018. On Wednesday, join Eric and Audrey Mornings as they speak with retired Lieutenant General Jerry Boykin about the life and legacy of John McCain who served our country in the Vietnam war. 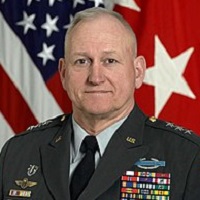 Lt. Gen. (Ret.) William G. "Jerry" Boykin serves as Family Research Council's Executive Vice President. He was one of the original members of the U.S. Army's Delta Force. He was privileged to ultimately command these elite warriors in combat operations. Later, Jerry Boykin commanded all the Army's Green Berets as well as the Special Warfare Center and School. In all, Lt. Gen. Boykin spent 36 years in the army, serving his last four years as the Deputy Undersecretary of Defense for Intelligence.