Most moms can relate to being stressed to the point of breaking at different points in their lives. On Tuesday, Eric and Audrey Mornings will have Anita Renfroe as their special guest, who will share how all women of all ages can learn to laugh at themselves with humor and grace. 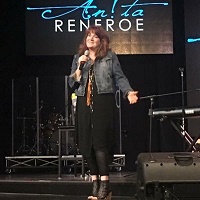 It’s been a wild decade going from “stay-at-home-mom” to “YouTube comedic Phe-mom-enon", but Anita Renfroe doesn’t mind.  Anita has been featured as a comedy correspondent for Good Morning America and has appeared on “Dr.Phil”, Sirius XM’s “Oprah and Friends”, CBS’s “The Early Show”, Fox News Channel’s “Fox and Friends”, “Inside Edition”, Nickelodean’s “Mom’s Night Out” and many more.  Anita tours with her own comedy concerts and inspirational women’s conferences where she routinely packs out venues across the United States.  Renfroe and her husband John live in Atlanta, Ga with their spoiled dogs, Maggie and Chipper. They have 3 adult children and 5 amazing grand babies!