A theologian once observed that many followers of Jesus love the thought of heaven, but don’t desire to bear His cross—choosing comfort over tribulation. So, have you considered if your lifestyle is keeping you from following Christ more fully? On the next MoneyWise Live, hosts Rob West and Steve Moore talk with author Michael Blue about breaking the chains of complacency. Then Rob and Steve will answer your financial questions. Free to follow Christ on the next MoneyWise Live at 4pm Eastern/3pm Central on Moody Radio. 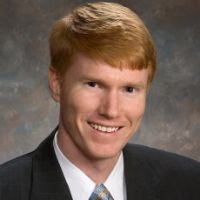 Michael Blue serves as the Executive Director and General Counsel for the Ron Blue Institute for Financial Planning. Prior to his role with the Ron Blue Institute Michael practiced for ten years as an attorney focusing on business and securities law. Michael earned his law degree from Baylor University, where he graduated summa cum laude and served as the Managing Executive Editor of the Baylor Law Review. Prior to his career as an attorney, Michael worked as a financial planner for Ronald Blue & Co. where he earned his CFPTM  designation in 2002.  Michael has a B.B.A. in Finance from the University of Texas at Austin.