Join us this hour as we take a look at multiple issues impacting your life. We are going to give you tangible ways to pray for the people whom God has called into the entertainment industry. Hear from a woman whose mission field has a ‘red carpet’. We then move to some touch topics dealing with bioethics. For example, should euthanasia be offered to those suffering from PTSD? Should a lagoon have rights – like people? And why are so many hospitals rushing to perform mutilating surgeries on minors? Get ready to think biblically and critically!

When our guest moved from Kuwait to South Carolina, he expected adventure---but when he surrendered his life to Jesus, his world turned upside down! Join us to hear about his encounter with Christ that filled him with such powerful peace that he was emboldened to commit "cultural treason." You'll be riveted by his conversion story---and his fascinating cross-cultural perspective. Discover again how the Gospel changes everything! 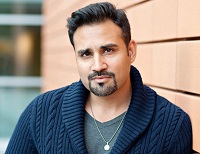 Naeem Fazal, a Pakistani, was born and raised as a Muslim in Kuwait. He came to the United States shortly after the Gulf War of 1990. In 1992, he had a supernatural experience with Christ that changed the course of his life. He was ordained in 2001 at Seacoast Church. In 2006, with the help of Seacoast Church, the ARC, and Mosaic LA, he planted Mosaic Church in Charlotte, North Carolina. Naeem has been featured inRelevant magazine, Leadership Journal, and Charlottemagazine.