Tackling one of the most serious accusations against Christianity head-on, our guest will demonstrate that the gospel provides dignity, liberty, and equality to all and can spark positive cultural transformation. Without overlooking instances of religious shortcomings, he will reveal how the ethnically diverse roots of Bible stories have inspired tremendous social reforms, and challenges believers to contribute to lasting change.

Join us for a full hour of news and analysis. We start with some headlines of the day and then discuss how the nation’s largest abortion provider is moving from doing abortions to pushing the abortion pill. We end our hour together learning how to pray for specific countries where following Christ is particularly difficult. Get ready to lengthen your prayer list. 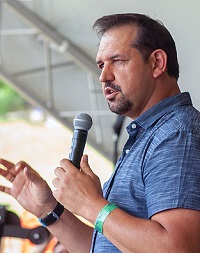 Abdu Murray is the president of Embrace The Truth. Through the ministry Murray offers the credibility of the gospel message as a speaker and writer. He has authored several books including Saving Truth, Grand Central Question, Apocalypse Later, and his newest book More than a White Man’s Religion. For most of his life, Abdu was a proud Muslim until a nine-year historical, philosophical, theological, and scientific investigation pointed him to the Christian faith. Abdu has spoken to diverse international audiences and has participated in debates and dialogues across the globe. Abdu holds a B.A. in Psychology from the University of Michigan – Ann Arbor and earned his Juris Doctor from the University of Michigan Law School. He is an apologist who has lead dialogues, open forums, and debates around the world at universities, churches, and business and government gatherings. He also hosts the All Rise podcast.

Hugh Brown is the executive vice president of American Life League and serves on its board. He is the son of Judie Brown who helped co-found the organization in 1979 along with her husband Paul Brown. Hugh has been involved in the pro-life movement most of his life. He enjoys talking about subjects relating to marriage, children, and the family.