Join us for a fascinating and important conversation about religious liberty. We start by speaking with a much-loved Roman Catholic nun who is also a physician-surgeon and retired U.S. Army colonel. She has filed an important lawsuit designed to protect religious liberty. We then turn our eyes toward the Persecuted Church and learn very special ways to pray for our brothers and sisters who are paying a price for saying, “Yes, Lord.” Get ready to lengthen your prayer list.

Hour 2: Views From Down Under

Travel with us ‘down-under’ to hear our favorite Scottish apologist share his perspective on a wide variety of issues. From Christian leaders who fail to the push to make children drag queens, this committed follower of Christ will offer his apologetic on how to apply the Word of God to the world around us 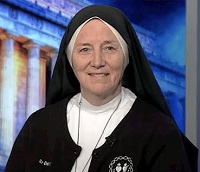 Sister Deirdre Byrne is a religious sister of the Little Workers of the Sacred Hearts and a retired colonel in the U.S. Army Medical Corps. As an Army and missionary surgeon, she has performed surgery on the ground after natural and man-made crises in Kenya, Afghanistan, Haiti, Iraq and Sudan.