This hour we share some stories making headlines and then move to the West Coast where we hear specific prayer requests for those whom God has called to serve in the world of entertainment. We round out the hour hearing a very encouraging report of how some in the Muslim world are opening their hearts to the message of the Gospel. Come ready to hear good news and to lengthen your prayer list!

The Bible is the most extraordinary book you’ll ever read; it’s how God speaks directly to us and how his Spirit works to change us. But it can seem intimidating, confusing, and even a little bit boring. Our guest will show you that the skills you need to read the Bible are not beyond your grasp. Join us as he gives you the tools to read and understand the Bible for yourself, helping you move from confusion to confidence as you enjoy refreshment in God’s word. As you read the Bible, you will hear God speak, and you will be changed to be more like Jesus. 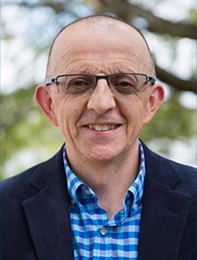 Gary Millar is the Principal of Queensland Theological College in Brisbane, Australia. He teaches Old Testament, Biblical Theology and Preaching. Before taking up the post as Principal he was pastor for 17 years in both Ireland and Northern Ireland.