Ambushed by the enemy, our guest, an Army ranger, mistakenly fired the shots that may have killed fellow soldier and former NFL player Pat Tillman. In the aftermath, he fought remorse, depression, addiction, and PTSD that claimed his marriage, his faith---and nearly his life. Discover how he ultimately found forgiveness. Don’t miss a minute of this riveting discussion.

He always wanted to be a soldier and after 9/11, he enlisted in the Army. During his second deployment to Iraq, his life changed forever when the vehicle he was traveling in was struck by an improvised explosive device. Hear the inspiring story of this wounded warrior who was brought to his knees but now stands firmly on God’s sovereignty. 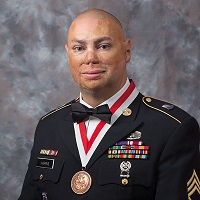 Shilo Harris enlisted in the US Army after 9/11. On his second deployment, he sustained catastrophic injuries when his vehicle was struck by an IED. Harris spent nearly three years in the burn unit of Brooke Army Medical Center. Harris retired from the military in 2010 and is now a motivational speaker, urging audiences to welcome veterans and wounded warriors home with open arms and open minds.