Hour 1: Get Over Yourself

Reject the hollow message of personal prosperity and return to the humble truths of the Gospel! Our guest will help us discover the kind of abundant life Jesus truly desires for his people by identifying this insidious popular theology in churches and the wider culture, examining its devastating effects, and fighting it with Scriptural truth.

Hour 2: The Cost of Obedience

Why not just make the cake? That’s a question countless people across the country started asking in 2012, our guest told two men who walked into his Masterpiece Cakeshop that he couldn’t create a custom cake for their same-sex wedding. And the question only grew more urgent as he had to defend himself first before the Colorado Civil Rights Commission and then numerous courts—losing at every step of the way until the U.S. Supreme Court ruled in his favor in June 2018. But for our guest, there are deeper principles at stake—principles too precious to abandon for the sake of convenience and safety. These principles should be of concern to every American, including our guest’s adversaries. If the freedoms he has sought to protect are lost, they may never be regained. Dean Inserra is the founding and lead pastor of CITYCHURCH, where he leads the vision and preaching. Dean was called to start a church in his hometown of Tallahassee when he was the Student Body President at Leon High School. He is passionate about reaching the city of Tallahassee with the Gospel, to see a worldwide impact made for Jesus. Dean graduated from Liberty University and attended Southern Baptist Theological Seminary in Louisville, KY. He holds a MA in Theological Studies from Midwestern Baptist Theological Seminary and is pursuing a D.Min from Southern Seminary. Dean is an advisory member of the Ethics and Religious Liberty Commission's Leadership Council with the Southern Baptist Convention. 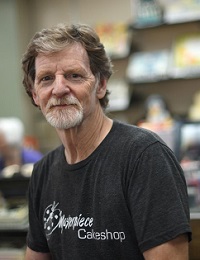 Jack Phillips opened Masterpiece Cakeshop in 1993, where he, his wife, Debi, and their adult daughter, Lisa, continue to serve the community of Loveland, Colorado.