Best of In The Market: Mysteries of the Messiah

We're used to thinking of the Old and New Testaments as separate sections of the Bible---but are they? Our guest, a messianic rabbi, will reveal the links between the OT and NT. The connections he draws between the Messiah, Torah, patriarchs, and prophets will help you understand how the whole of Scripture fits together. Join us to see how God has revealed His plan of salvation through Jesus. 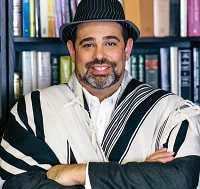 Rabbi Jason Sobel is the founder of Fusion Global. Rabbi Jason received his rabbinic ordination from the UMJC (Union of Messianic Jewish Congregations) in 2005. He has a B.A. in Jewish Studies (Moody) and an M.A. in Intercultural Studies (Southeastern Seminary). He is a sought-after speaker and has made multiple appearances on national television, including the Trinity Broadcasting Network, the Daystar Network, and the Dr. Oz Show. Rabbi Jason is the author of Breakthrough: Living a Life That Overflows, Aligning with God’s Appointed Times, and he is also the coauthor of New York Timesbestseller The Rock, the Road, and the Rabbi with Kathie Lee Gifford.