Hour 1: The 6 Needs of Every Child

In a culture obsessed with parenting formulas, it's easy to miss the fact that science and lived experience have proven that human development and thriving are a matter of relationship. Drawing on decades of psychological research, neuroscience, and their own experience as parents and people of faith, our guests will present six relational needs for human growth that will transform the way you think about your child--and yourself. Together, the needs form a trustworthy compass to guide you and your child to a path of purpose and relational wholeness.

Hour 2: Once A Shooter

Twice pardoned—first by God and later by the state—our guest now walks in freedom and grace. At first, reluctant to tell his story but compelled now to share what God has done, he gives a firsthand account, four decades later, of what it was like to be a high school shooter. What makes his story different from all the others that have commanded headlines over the last twenty-odd years? How did he not only make it out alive, but go on to have a successful life when so many other high school shooters are now behind bars or in the grave? Join us for this powerful story of finding real freedom in forgiveness. 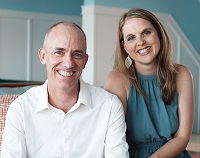 Jeffrey Olrick, Ph.D. is a clinical psychologist who specializes in working with children and families. After earning his M.Ed. and Ph.D. at the University of Virginia, Dr. Olrick completed a two-year Fellowship at the Mary Ainsworth Child-Parent Attachment Clinic and now has over twenty years of experience in a variety of settings, including residential treatment, the public school system, community mental health and private practice.

Amy Olrick is an author and a techie who has spent her professional life working with organizations to build social movements grounded in the ethic of love. Her work and writing have been featured in The Guardian and USA Today.

TJ Stevens (then known as James Stevens) was a disturbed young man who opened fire inside his Virginia high school in 1982, injuring no one. After doing time in prison and being miraculously paroled, he embarked upon a remarkable journey that included playing the role of Jesus in a national-acclaimed Passion play in Washington D.C. and other major cities, and working in various music and video production roles on multiple projects in television and film. A songwriter and singer, he has performed on many military bases, at many music venues around the country, and even at the American Country Music Awards. He is the owner of Global Network Solutions and the president of Christian Concert Promotions (Stevens Music Group.) He works with many well-known Christian artists, events, and tours.