Socialists and feminists have long targeted the family as an enemy, even the enemy. For socialists, the family is an obstacle to the full power of the progressive state. For feminists, the family denies female independence and equality. Today, however, the battle has grown even fiercer, as socialists and feminists have found a global ally in the United Nations, which is using its extraordinary power to undercut the authority and the sanctity of the family around the world—even in the United States. Today our guest, an international policy advisor, exposes this unholy alliance between globalist liberals, feminists, and socialists, and unveils the shocking harm being done, right now, to women and children in America and around the world.

Until just a few years ago, gender dysphoria—severe discomfort in one’s biological sex—was vanishingly rare. It was typically found in less than .01 percent of the population, emerged in early childhood, and afflicted males almost exclusively. But today whole groups of female friends in colleges, high schools, and even middle schools across the country are coming out as “transgender.” These are girls who had never experienced any discomfort in their biological sex until they heard a coming-out story from a speaker at a school assembly or discovered the internet community of trans “influencers.” Our guest, a writer for the Wall Street Journal, has dug deep into the trans epidemic, talking to the girls, their agonized parents, and the counselors and doctors who enable gender transitions, as well as to “detransitioners”—young women who bitterly regret what they have done to themselves. Coming out as transgender immediately boosts these girls’ social status but once they take the first steps of transition, it is not easy to walk back. She offers urgently needed advice about how parents can protect their daughters.

Kimberly Ells is a policy advisor for Family Watch International, where she works to protect children from early sexualization and to promote the family as the fundamental unit of society. Since graduating from Brigham Young University with a degree in English, she has become avid researcher and writer on family issues. Kimberly has authored policy briefs for international distribution, and has spoken at the United Nations and other venues across the country. 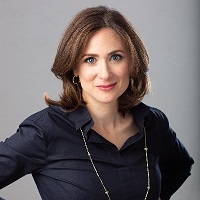 Abigail Shrieris a freelance writer for the Wall Street Journal. Her specialty is writing about law and culture. She holds an A.B. from Columbia College, where she received the Euretta J. Kellett Fellowship; a B.Phil. from the University of Oxford; and a J.D. from Yale Law School.