We start the first hour of our broadcast looking at some of the stories making the news. With more and more states pushing for physician-assisted suicide, you will learn that baby boomers are in the cross-hairs of this debate and that euthanasia might be pushed for no other reason than organ donation.  We finish the hour by talking with a distinguished former General who has both a biblical and a military view of what is happening in Iran.  Don’t miss a minute of this fascinating conversation.

Hour 2: Going Down Under

This hour we wing our way to Australia and hear from our favorite Scottish apologist.  We cover a lot of territory so get ready to look at some of big news stories of the month from a biblical perspective.  Learn why capital letters are scaring some students; why the royal mess is truly a mess; the truth behind the Australian fires and why quoting one professor can get a student a failing grade.  Join us for a very full hour of radio.

Lieutenant General William G. Boykin(retired) is the founder of Kingdom Warriors ministry and the executive vice president of the Family Research Council.  He was the US Deputy Under Secretary of Defense for Intelligence under President George W. Bush from 2002–2007, and is the author of three books with combined sales of almost half a million copies.  He resides in Washington DC. 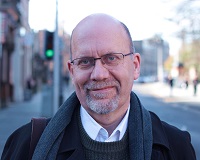