Pastor Ron Zappia and his wife Jody were high school sweethearts but by their first anniversary, they were on the brink of divorce!  Jesus restored their marriage and rewrote their life plan! If you are engaged, newly married, or are years into your marriage, Ron and Jody will share the lessons they learned and answer your relationship questions. Learn to build a secure marriage that will survive the storms of life! 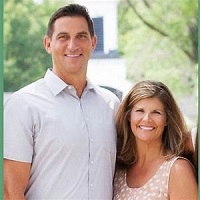 After spending 7 years in the business world, Pastor Ron and his wife, Jody, felt called to plant a church. He quit his job, went to seminary, and in the year 2000, stepped out in faith with Jody and a handful of people to plant Highpoint Church.  Highpoint Ministries was later launched in 2013 to provide comprehensive teaching from God’s Word through weekly and daily radio broadcasts, conferences, and resources. Highpoint Ministries currently airs on over 400 stations around the United States.  Pastor Ron is a graduate of Bowling Green State University and Trinity Evangelical Divinity School in Deerfield, IL. He and his wife Jody live in Wheaton, IL, and have three adult daughters.