If you have been married for very long, there may be days when you wonder if your relationship will go the distance.  Maybe you have even muttered those despairing words, “I can’t do this anymore!” You are not alone!  Coming up on Equipped, Carey and Toni Nieuwhof share what happened when they found themselves stuck in a troubled marriage and how they built a road to a better future! 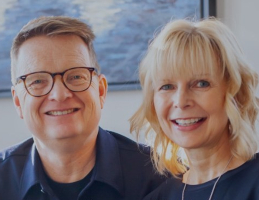 Toni Nieuwhof is a family law mediator, former divorce attorney and co-host of the Smart Family Podcast. She just authored her first book, Before You Split.
Toni has been married for over 30 years to Carey Nieuwhof. Carey also a former lawyer, and he’s an influential leadership author and a much sought after podcaster and conference speaker.  Toni and Carey started Connexus, one of North America’s most influential churches, near Barrie, Ontario, where they currently reside. They are the parents of two grown sons.