Christmas is a great time of year to fill the house with music. Dove winning artists Keith and Kristyn Getty will help you out with that. They've come out with a new album, Confessio. They'll sit down with Ed Stetzer to talk about their music and their work in serving the Lord. 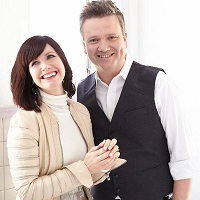 Keith and Kristyn Getty occupy a unique space in the world of music today as preeminent modern hymn writers. “In Christ Alone” (penned by Keith and long-time writing partner, Stuart Townend) holds the #1 position of most-frequently-sung in UK churches for the past 9 consecutive years. Keith and Kristyn Getty continue to be global ambassadors for modern hymns in the USA and throughout the world. Their worldwide representation of modern hymns led to the creation of their global church music conference, Sing! The Gettys led their third Global Hymn Sing which featured over a million believers, in 55 countries, and in 32 languages as they joined together to proclaim Jesus Shall Reign.