God is leading an unprecedented worldwide movement toward the Unreached. June 9 marks the International Day for the Unreached, a day to focus on reaching those who've never heard about Jesus with the good news of the gospel.  Ed Stetzer talks with FEBC Global Ambassador and IDU Alliance leader Wayne Pederson about this important call. 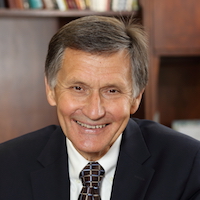 Wayne Pederson is the Global Ambassador of the FEBC (Far East Broadcasting Company) and an Alliance leader for the International Day for the Unreached.  Before taking on that role, Wayne served as president of Christian broadcast ministry, Reach Beyond, and as chairman and president of NRB (National Religious Broadcasters).  Pederson also served at Moody Radio from 2004 - 2008, first as manager at WMBI, then as Vice President for Moody Broadcasting. He received the 2018 NRB William Ward Ayer Award for Distinguished Service at Proclaim 18.