If there’s an empty chair at the table this Christmas, don’t miss Tuesday’s Chris Fabry Live. It’s a "Best of" broadcast featuring singer and songwriter Mark Schultz. His song, "Different Kind of Christmas," has touched a lot of hearts over the last few years. Hear where that song came from and reaction from listeners to the losses they've felt at Christmas. It’s a program for every longing heart on Chris Fabry Live. 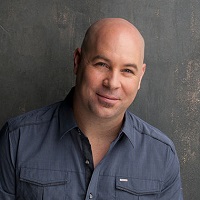 A lot of artists talk about chasing their dreams but for Christian recording artist Mark Schultz, it’s never been about the chase. Instead, it’s about following God’s call. Incidentally, this has led to what looks like any artist’s dream: two million records sold to date, ten No. 1 singles, a Dove Award as well as multiple nominations. But sometimes following God’s call might mean following it away from music, or, at least away from music as others see it. Mark Schultz slowed down on the music and touring side of things, but not on the family side. Mark and his wife now have three kids, ages six, four and two. And while he is still following the call of fatherhood, God’s call has also led Mark back to music with a new energy, new perspective and a new album aptly titled Follow.