Fernando Ortega calls him one of the greatest living banjo players on the planet. Monday on Chris Fabry Live, Ron Block will join us. He’s best known for his work with the Grammy-winning band Alison Krauss and Union Station. Our topic is how to cultivate a dependence on God that allows us to live fully loved. Don’t miss the music and encouragement on Chris Fabry Live. 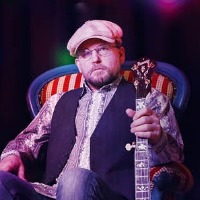 Ron Block has been banjoist, guitarist, vocalist, and songwriter for Alison Krauss & Union Station since 1991. He wrote many of the band's gospel songs: "There is a Reason," "In the Palm of Your Hand," "Jesus, Help Me to Stand," and his playing has been featured on albums by Dolly Parton, Vince Gill, Reba McEntire, Randy Travis, Alan Jackson, Brad Paisley, Fernando Ortega, and others. He's received 14 Grammy Awards for his work with Alison Krauss, Vince Gill, and the O Brother, Where Are Thou soundtrack, and received a Dove Award for his song "A Living Prayer." He has also written on spiritual and musical topics for the Rabbit Room website since its inception in 2007. He married Sandra in 1988 and they live in rural Tennessee. They have two grown children, Ethan and Erica.