A lot of people talk about being called to ministry. But Dave’s story is about being called from the pastorate into his family’s gear shop. He didn’t expect that transition to become a spiritually transformative season of his life, but it did. If you’re struggling with finding purpose in your work, don’t miss the conversation on our Labor Day edition of Chris Fabry Live. 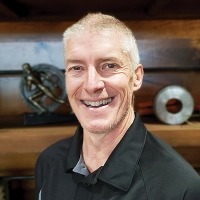 Dave Hataj is the second-generation president and owner of Edgerton Gear, Inc., a Wisconsin-based custom gear manufacturer. As a journeyman machinist by age 21, he then earned a Bachelor's Degree from the University of California-Irvine. He completed his Master's Degree from Regent College in Vancouver, B.C. His graduate work focused on Systems Theory in a Family Business context. In 2014 he earned a Doctorate of Transformational Leadership from Bakke Graduate University, developing a curriculum called Craftsman with Character. The course introduces high school students to the trades and manufacturing as an excellent career path, while developing character and soft skills.