Confessions of a French Atheist

He was a French atheist—and he was perfectly happy. Yet a chance encounter with a beautiful woman would change the way he thought about his life and beliefs forever. Guest host Jon Gauger will talk with a man who didn’t think he needed God, but who grew to believe in God after thinking through the relationship between science and faith. Hear the Confessions of a French Atheist on Chris Fabry Live. 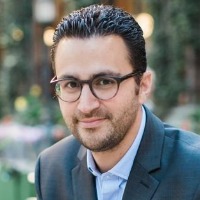 Dr. Guillaume Bignon was born and raised in France, where he studied math, physics, and engineering science. He currently works as a software engineering manager. After a wholly improbable conversion from atheism to Christianity, Guillaume earned a master's in biblical literature with an emphasis on the New Testament, and a Ph.D. in philosophical theology. His areas of interest include the metaphysics of free will, natural theology, and soteriology. Guillaume is an executive committee member of Association Axiome, a society of French-speaking Christian scholars. He and his wife, Katherine, have five young (and adorable) children.