You have to join us because our audio compadre from Moody Radio Cleveland will join us. Brian Dahlen has been exploring some deep-seated family issues in a new podcast called “The Grandfather Effect.” It’s an honest, open look at some wounds and family struggles that may help you deal with some of your own. Hear about The Grandfather Effect on Chris Fabry Live. 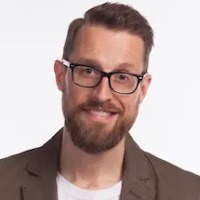 Brian Dahlen is the host and creator of The Grandfather Effect podcast, as well as cohost of Brian and Jannelle Mornings and the Brian and Jannelle Podcast on Moody Radio Cleveland. Brian became a Cleveland morning show host after working at Moody Radio Chicago as a radio host, producer, and cohost of a weekly podcast. Brian caught the radio bug while teaching history at a high school near Minneapolis, where he was cohost and producer of a weekly radio program. After teaching for six years and graduating with a master’s degree in education, Brian lives with his wife and five children in Broadview Heights, Ohio.