Lingering at the Cross of Christ

Twelve years ago two rising hymn writers joined us on Chris Fabry Live to talk about the passion of Christ, His sacrifice and suffering, and His victory over death, hell, and the grave. Keith and Kristyn Getty shared their hearts about the power of the cross. Linger a little with us as we contemplate what Jesus accomplished at Calvary. Don't miss our Good Friday edition of Chris Fabry Live. 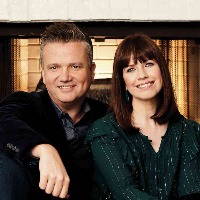 Keith and Kristyn Getty occupy a unique space in the world of music today as preeminent modern hymn writers. In re-inventing the traditional hymn form, they have created a catalogue of songs teaching Christian doctrine and crossing the genres of traditional, classical, folk and contemporary composition which are sung the world over. Keith and Kristyn live between Northern Ireland and Nashville with their daughters, Eliza Joy, Charlotte, Grace, and Tahlia.