If you watched the NCAA championship on Monday, you heard Roy. But you probably didn’t know it because—well, that’s part of the interesting story. Roy Tosh was a basketball sensation in the Hoosier State. Got a full ride scholarship. And then his life spiraled. Hear his story—and how he made it onto the championship game broadcast. Don't miss Chris Fabry Live. 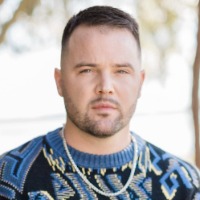 Roy Tosh was born and raised in Indianapolis, Ind. As a high school student, he lived for the limelight of fame on the basketball court and the benefits of his earned reputation when he stepped off the court. After graduating from high school, God encountered Roy in such a powerful way that he waved goodbye to his “personal fame” and then began a relentless pursuit of Christ. Despite the absence of a musical background, Roy Tosh found himself filled with a message that poured out of his soul through Hip Hop music. Roy has opened for Grammy winning recording artist Lecrae, Jeremy Camp, Andy Mineo, and more. He has also shared stages with Pillar, Jordan Feliz, Britt Nicole, Social Club, Kutless, KB, Tedashii, This’l, Benjah, V. Rose, and more. Tosh serves as director of a non for profit organization, CFI Ministries, that he started with his wife which aims to reach “just 1 more” with God’s love through media and live events. He has worked beside many organizations such as FCA, CRU, Young Life, and has ministered at a variety of churches, camps, and youth groups across the globe. His music videos have been aired on GodTV, JCTV, UPTV, as well as other television networks. Roy, his wife, and three children live in Orlando, Fla.