​If you feel like your life is out of control because you rush from one appointment to the next, trying to get all the checks on your busy to-do list, don’t miss Chris Fabry Live. Jordan Raynor says there’s a different way to live—it’s the way Jesus approached his day. This is not a new time management program—it’s a lifestyle. And you’ll hear about it on Chris Fabry Live. 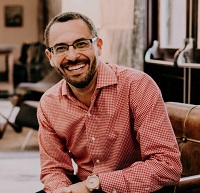 Jordan Raynor is a serial entrepreneur and national bestselling author who has helped millions of Christians around the world connect the gospel to their work through his podcast, devotionals, and books Called to Create and Master of One. He also serves as the executive chairman of Threshold 360, a venture-backed tech start-up that has built the world’s largest library of 360-degree virtual experiences of hotels, restaurants, and attractions. A highly sought-after speaker on the topic of faith and work, he has spoken at Harvard University, SXSW, and many other events around the world. Jordan has been selected as a Google fellow twice, and he served in the White House under President George W. Bush.