On the next Chris Fabry Live, you’ll hear the heart of Rachael Nemiroff. She’s a young musical artist whose latest song came from a painful episode in her life. Like many today, her parents divorced when she was a child and that event has shaped and colored her life in a lot of ways. Share your reaction to "One Heart, Two Homes" on Chris Fabry Live. 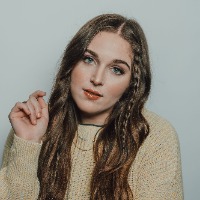 Rachael Nemiroff was born in Huntsville, Ala., and moved to Pennsylvania with her mother after her parents’ divorce. Her mother got her involved in a local playhouse theatre and in 10th grade, Rachael enrolled at a performing arts school. She also began to attend church with a friend and joined a youth band that played in the main church services. In her senior year, she attended Trevecca Nazarene University in Nashville, Tenn., and Rachael became active with the Christian music scene. In 2018, her music started making a commercial impact with the song “Circles,” followed by the singles “Belong” in 2019 and “Temporary” in 2020. In 2021, Rachael released her new single “One Heart Two Homes.”