Catching Up with Steve Saint

​He is an Ecuadoran-born entrepreneur, pilot, author, and son of missionary pilot Nate Saint. Steve Saint is back with his unique perspective on life. It’s been 9 years since an accident left him partially paralyzed. We’ll get an update on his health and the role that suffering has played in the trail he and his family have walked together. Don’t miss Steve Saint on Chris Fabry Live.

Free registration to watch the Christy Awards on 10/28 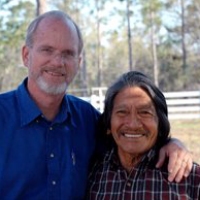 Steve Saint was born and raised in Ecuador where his parents were missionaries. His father, Nate Saint, was one of five young men killed in 1956 by the Waodani Indians (known as Aucas) whom they were trying to reach with the gospel. Steve founded and currently leads the ministry I-TEC (Indigenous People’s Technology and Education Center) with the vision of finding better ways of doing missions and giving indigenous God-followers the tools they need to fulfill their role in the Great Commission. Steve has authored three books: The Great Omission, End of the Spear and Walking His Trail. He and his wife, Ginny, live in Florida.